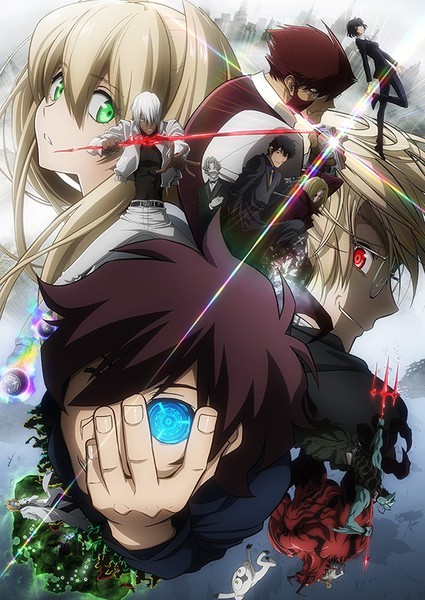 TV PVs & CMs: http://kekkaisensen.com/movie.html
Official website: http://kekkaisensen.com/
Synopsis One day, New York City as we know it vanished overnight into a mysterious fog. Now known as Hellusalem Road, it has become a place where another world beyond imagining is connected to our reality. The balance within this new world is protected by a secret society known as Libra. Leo, a journalist and photographer who arrives in the city, is unexpectedly recruited to join their ranks. (Source: animenewsnetwork)

Masich Comment: Nice animation, only slightly bugged on the story line of the first episodes against Leonardo's own words about his sister... probably get to see the reason of that later on in the series, but it still doesn't make any sense at the moment. On a side note... Seriously Taiga?! (Rie Kugimiya as White) Can't wait to hear that voice again! ah wth, going to watch Toradora now.

Retired
Bones is the studio behind this one? Somehow I missed that.

Anyway, a friend over on MAL suggested I give it a go and after having watched the trailer and reading the premise of the story, I may do just that since the VA behind Zoro is giving voice to the interesting character that is Zapp Renfro.

Lookin forward to it.

Update:
QUOTE Barbobot | 18 minutes ago
Already watched Kekkai Sensen and I got a Baccano vibe from it as well. The fact that it takes place in NYC probably helps with that. I actually thought Kekkai Sensen was one of the stronger shows so far. It can be pretty manic at times though making reading subs and noticing everything on the screen difficult. I'm really hoping this show gets picked up for a broadcast dub as that will help alleviate that. The story is by the same person behind Trigun as well and it's being directed by the person who did Kyousougiga (which you should check out if you haven't yet) so I'm expecting good things.
Oh I am looking forward to good things too. This one has lots of what I like in an anime...quirky, entertaining BGM, interesting, totally wacked bad guys and suave, smooth, interesting looking good guys. Looks like an interesting storyline in the works too.

I like the fact that Klaus has a great VA behind him too. Can't go wrong when you've voiced Freecss, Ging or Emiya, Kiritsugu.

How ironic it has become ... a one man show.

Staff member
Leader Council
Oh yeah this series. I watched the first two episode and I kind of like how they are using somewhere other than Japan for once. Although it being New York City just makes it somewhat easy for them to do this still I take it. Although things did change a bit, but form the looks of it the only way out of the city is by the Brooklyn Bridge though. Still have to wonder what happened to his sister though.

Sempai
Episode 4 was a bit rushed... Normally like episode 1-3 It would feel like I'm watching for ~45mins not ~23, this one however felt like 15minutes even.
I do understand that they want to get stuff such as introductions quickly out of the way and get as much of the story line in the play... and at least Zap's reactions are hilarious xD.

Oh well, I hope for more misfortune on Zap ^^

Pretty sure this was not meant for a 12 episodes time slot, but at least it's interesting to watch, including the damn cliffhanger at this point!

Two episodes to go! lets us hope for something nice! (even though first episode already spoiled it).

P.S. That English song in episode 10 at the end, gave me the creeps!!

It is actually three weeks, but I promised to myself on watching the last 2 episodes at the same time (incase of cliffhanger) and I did not count that recap episode 10,5 as a real episode... So I'm pretty much desperate for that last episode to air... any day now... any day...

Feels like waiting for The Devil Is a Part-Timer! Second season, even though there will never be one x.x (That's how desperate I feel).

Staff member
Leader Council
Not sure as to why but the final episode was delayed until I think the end of this month for some reason. Not sure as to why though, since it's the very last episode for the season here, so I have no idea why it's been backed up for this long though.

Sempai
QUOTE (Kid-Wolf @ Jul 27 2015, 04:24 PM)Not sure as to why but the final episode was delayed until I think the end of this month for some reason. Not sure as to why though, since it's the very last episode for the season here, so I have no idea why it's been backed up for this long though.The last episode of "Blood Blockade Battlefront" the (# 12), At MBS to July 4, it had been announced in advance that I am allowed to broadcast to July 5 at TOKYO MX and BS11, This time, it became a thing where I am allowed to postpone the broadcast.
Since the amount of the final story has become more than expected, In 30 minutes of airtime it was judged, that it is not able to be broadcasted.
Regarding the finale, it is scheduled to be allowed to broadcast as a larger version if we adjust the airtime.
It also becomes a form in which it keeps us from broadcasting it out for everyone that is looking forward to it, We are sorry.

(*Masich* It has been a month and they still have yet to announce anything. At this point I could better wait for the DVD to come out on November 18 >.>)