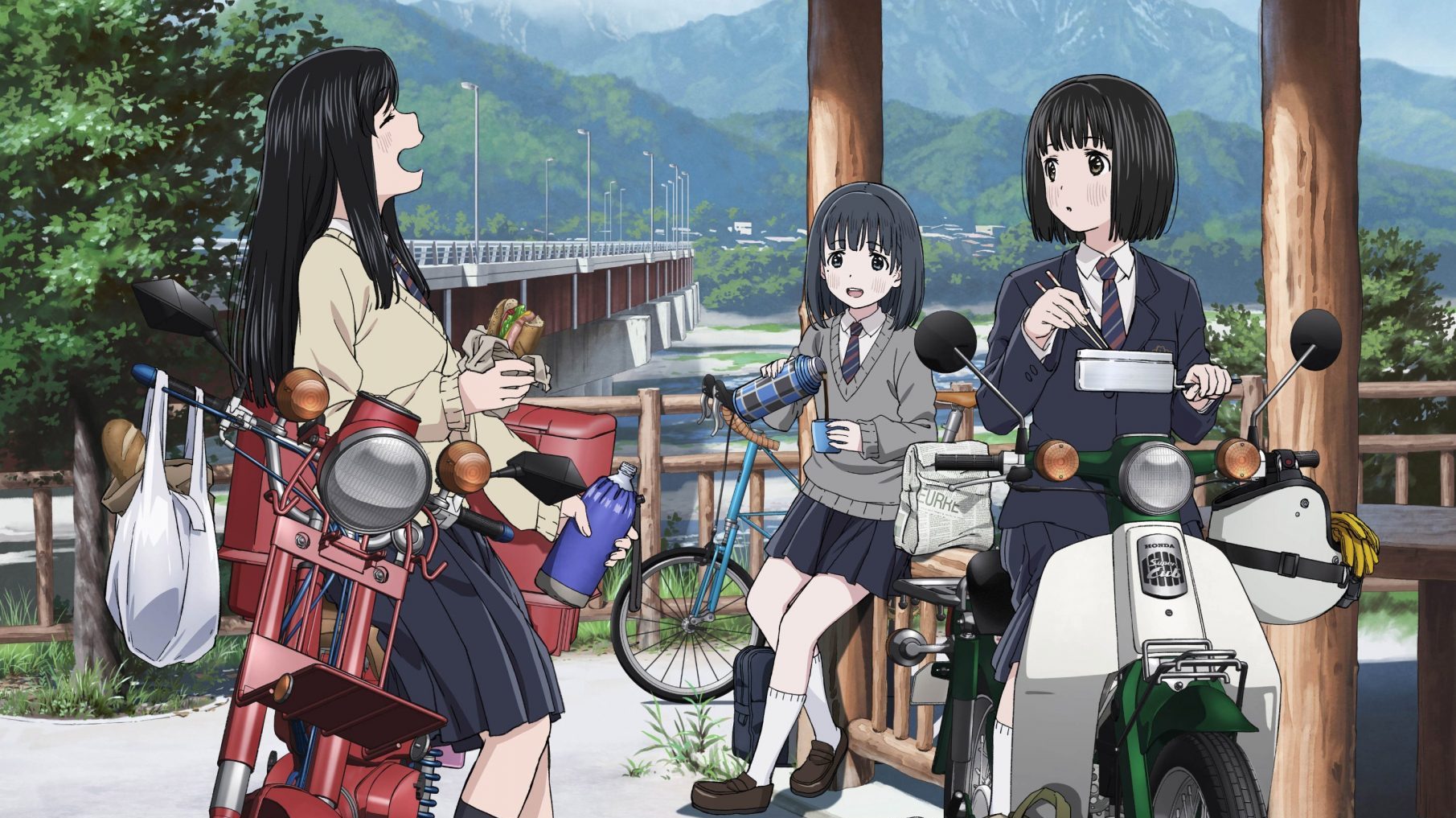 Super Cub is a slice-of-life, school series which was animated by Studio Kai. Super Cub stars Koguma as the main character who is a girl with no parents, no friends, no hobbies and no future goals and is struggling to find her way through life. The backdrop sounds deary even depressing so are we going to experience a sombre experience similar to Welcome to the NHK or No Matter How I Look At It, It's You Guys' Fault I'm Unpopular!?

Not really. Whilst the imagery and tone in the opening episode may suggest a damp/melancholy experience the turning point comes early on when Koguma buys a Honda Super Cub on the cheap. Her dull, directionless life gains a new element of joy that was not previously there. Sure, Koguma still displays a distinctly gloomy attitude there is a switch that turns on when she first sets foot on her scooter. It quickly becomes apparent that this scooter provides a new lease of life for Koguma.

Driving her new Super Cub Koguma shows a love towards her scooter that is endearing always trying to take great care of her vehicle to the best of her limited capabilities. As the episodes roll on, she explores further and further with her scooter and through her various adventures she opens her eyes to her surroundings, environment and life in general. In a very real sense, her exploration is symbolic to her overall character growth. And that is the series in a nutshell. It is a series about personal exploration, discovery and growth.

This growth is not limited to her overall health, it but also extends to her relationships as others join Koguma in her adventures. She meets Reiko and later Shii on her journeys and she learns to cope with the challenges of friendships and all the challenges that entails.

So far so good? I mean who doesn’t like a story with character growth that starts at a low somewhat depressing start only to become increasingly uplifting as the series progresses? Well, the main issue I have for Super Cub is that for a series that is about scooters and bikes the plot moves at a very pedestrian pace and that is putting it mildly. I think calling it snail like is probably closer to the mark. I felt it when marathoning the series but had I watched this week by week, I would have dropped Super Cub. It was simply too slow and Super Cub would have been a better show if they had reduced the length of the series. This is the biggest weakness of Super Cub.

Saying that it does have some strong points. The chemistry between Koguma and Reiko is good as I found Koguma was rather gloomy and wooden. The lively, cheerful and assertive demeanour of Reiko not only provided a good contrast but it also added a balance to the series. This is further helped when Shii joins the fray as her go getter attitude serves to lift the tone of the series even further. Moreover, her introduction is well timed as it occurs during a time in the series where the mood of the show is progressively on the up meaning her inclusion added momentum to this uplift. This all results in Super Cub ending on a much higher note than what we got at the beginning of this series.

The animation to Super Cub is good. This is particularly noticeable in the background shots and the vehicles themselves. It is just as well as the various scenery shots littered throughout the show really capture the overall exploration vibe this series is trying to convey creating greater gravity during those key moments. If you are into this sense of exploration then you may really dig into Super Cub as it really delivers on those moments. 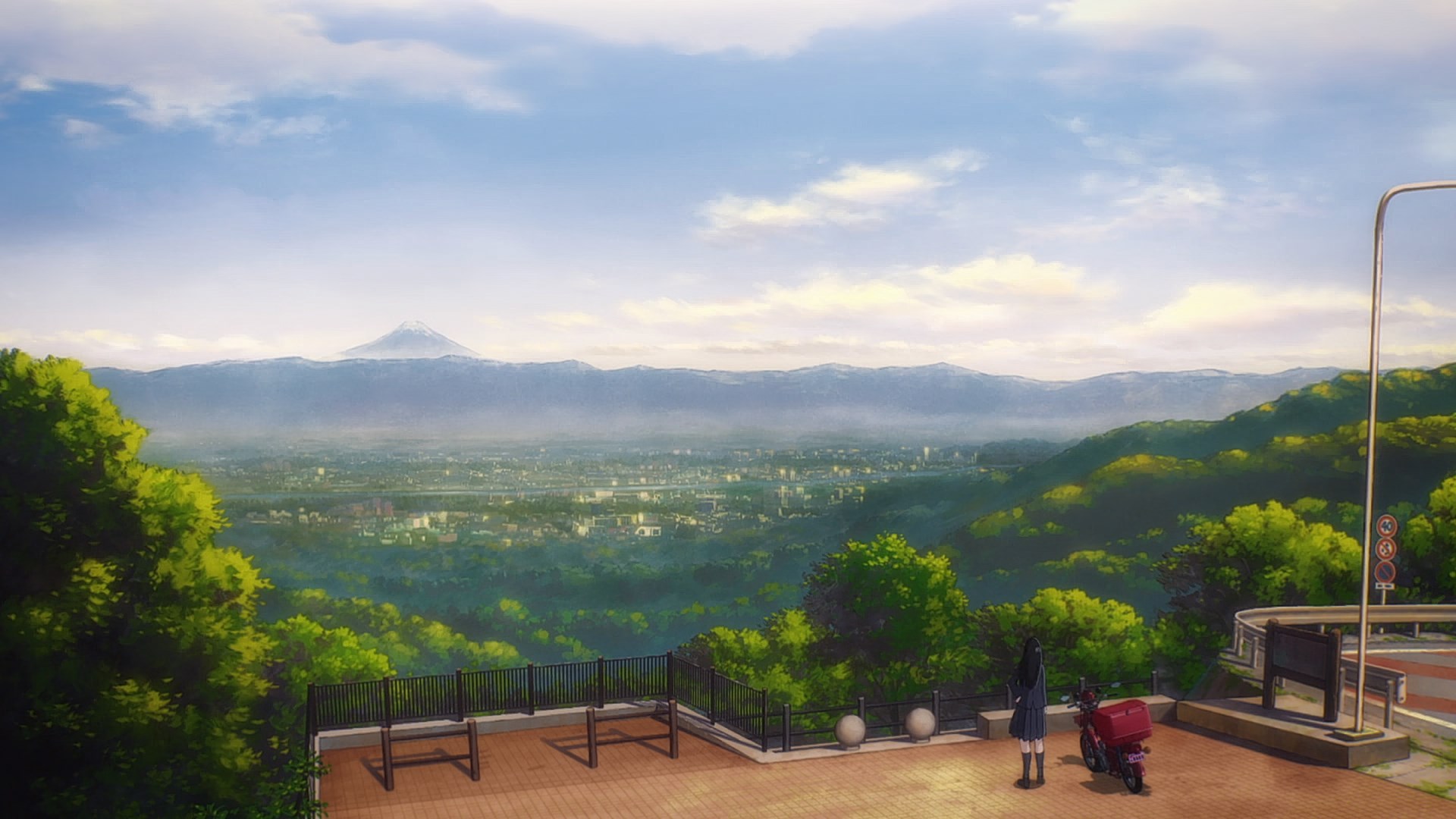 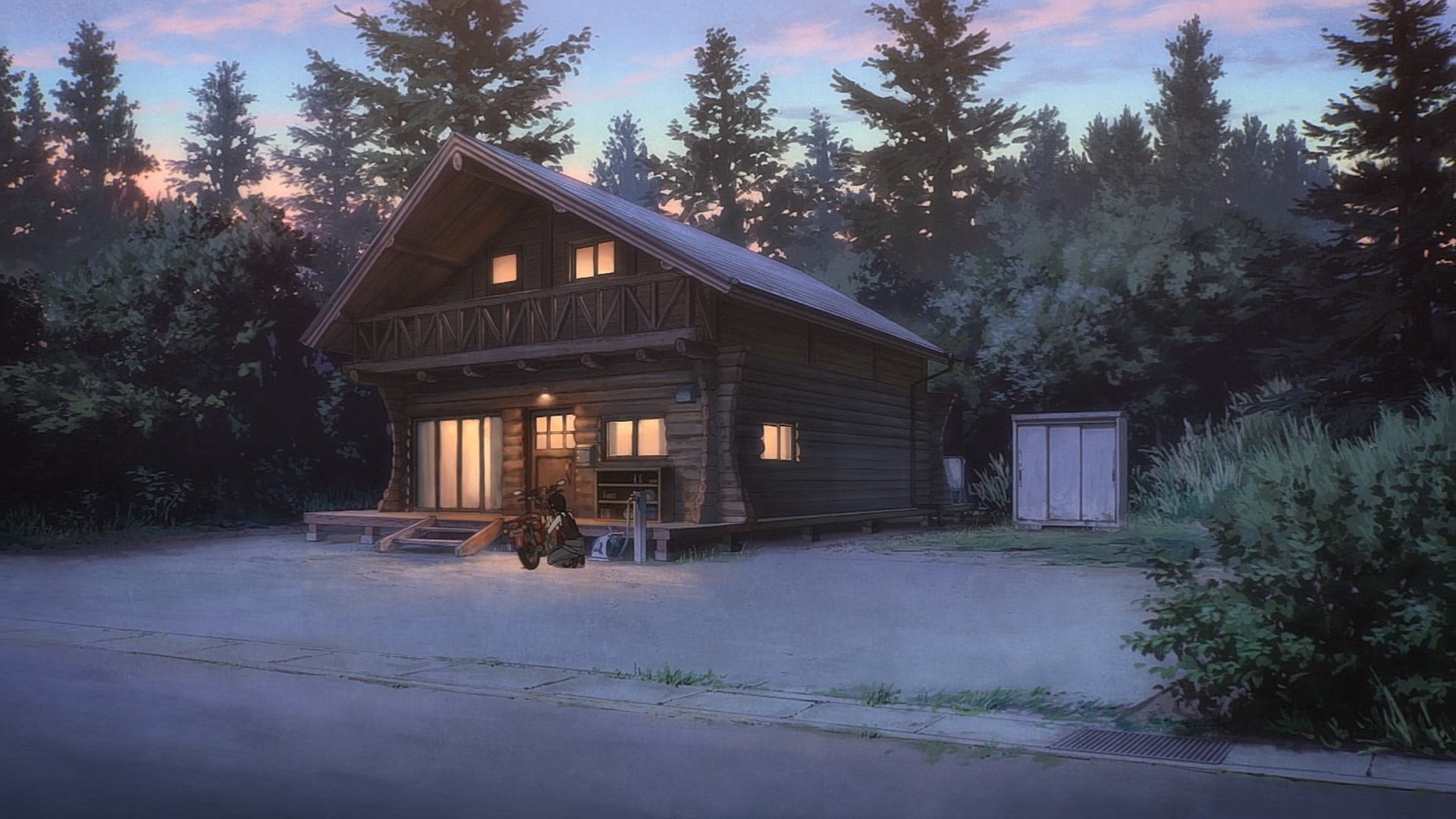 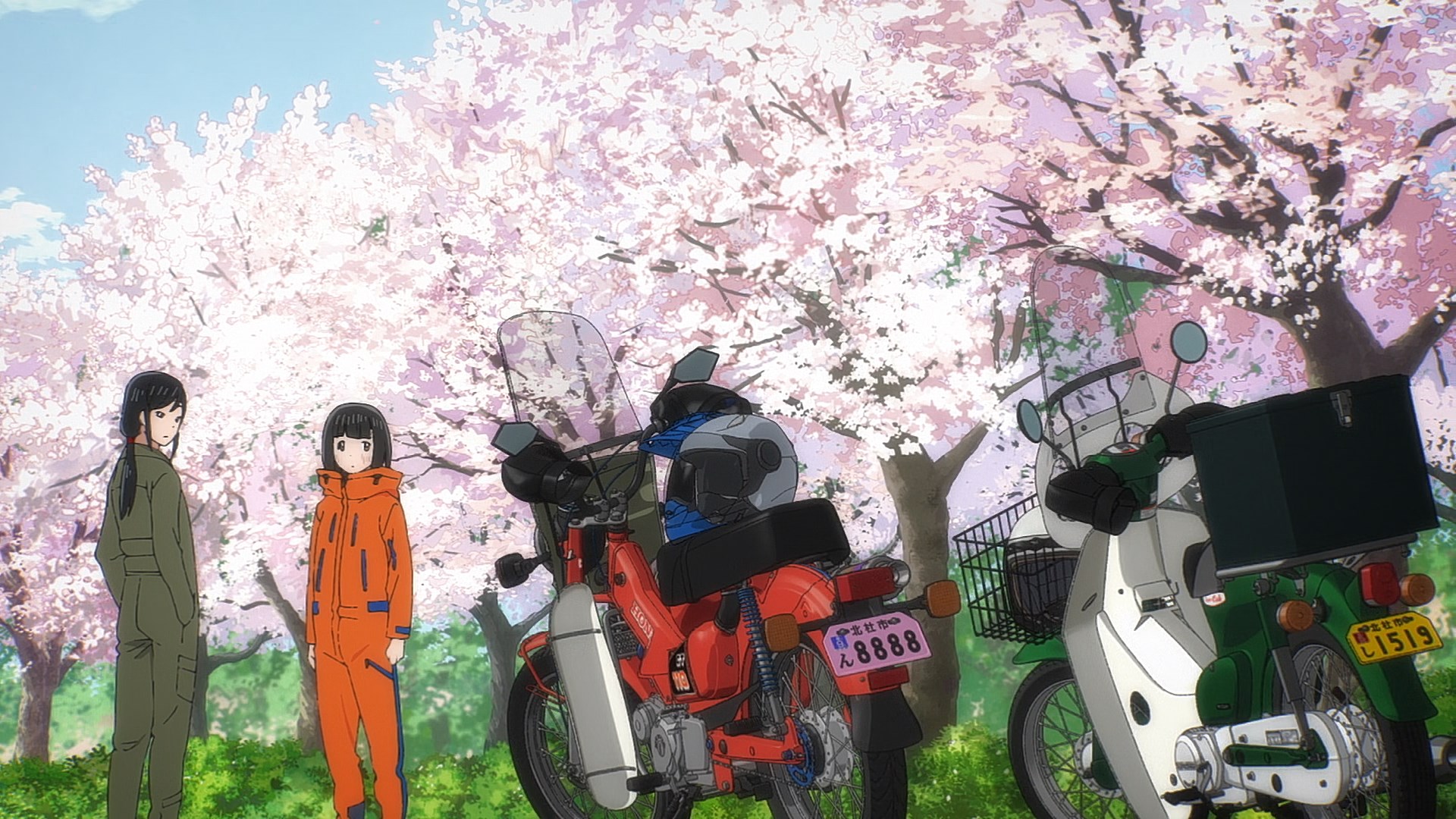 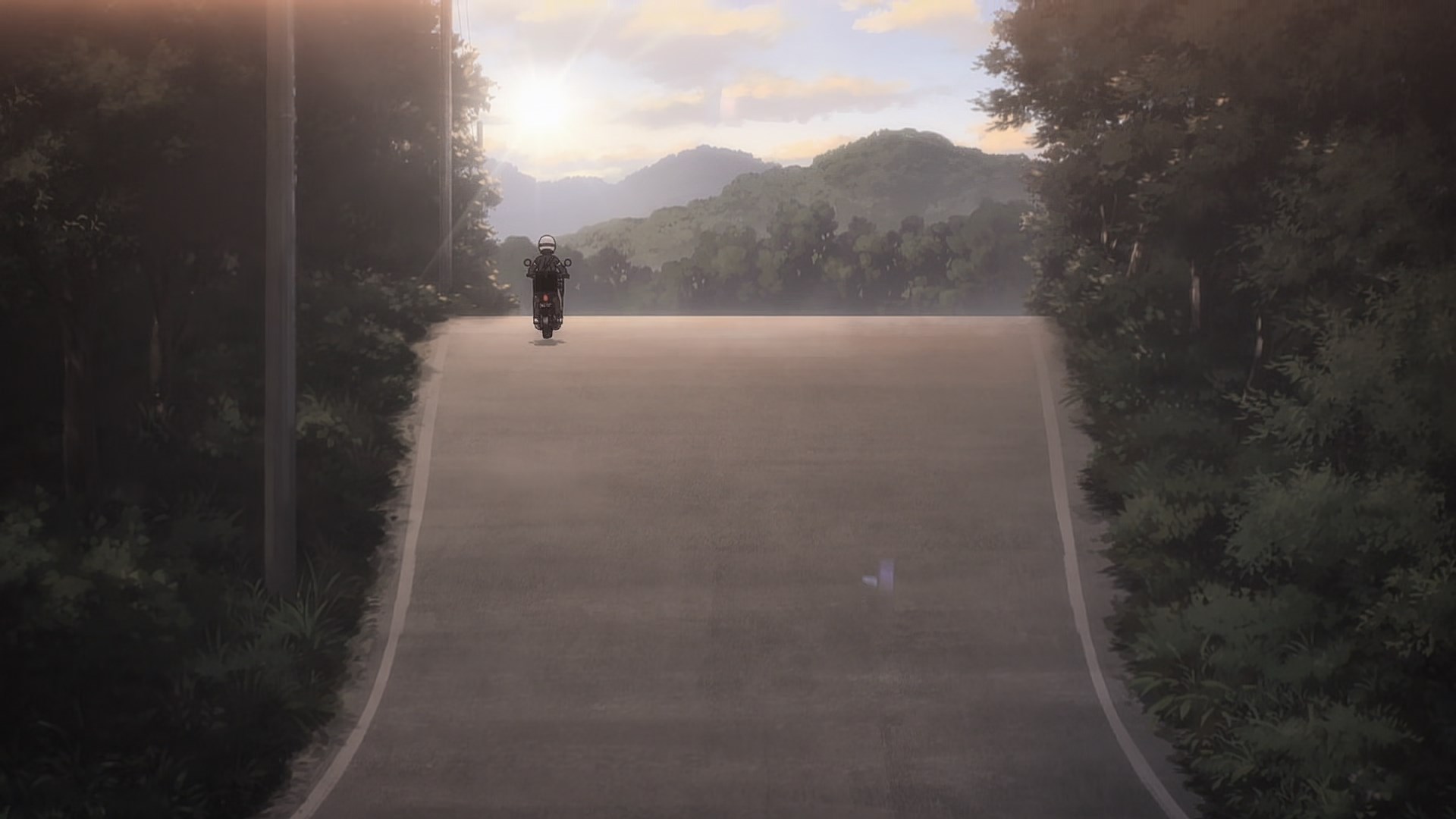 In terms of individual character designs, it cannot match the standard of the background shots or even the vehicles themselves. What should be mentioned however is the clever use of colours and shading that are used to convey emotions both good and bad which is a good touch not seen in enough anime. CGI effects are used in numerous driving scenes but it is done tastefully so as to not look too out of place. One thing that does happen a lot and has to be mentioned is the various shots of the Honda Super Cub make this series sometimes look like a big Honda advert. This isn't helped by the fact the girls only say good things about their Super Cubs. Maybe I am being cynical but it does make me suspect that perhaps Honda had a hand in the scripts. I could be paranoid here but it was a little sus at places. The opening song Mahou no Kaze and the ending Baru e no Dengon were not particularly memorable to me although the animation for the ending was pretty cool.

Overall, Super Cub is not a series I would recommend. Whilst it does have some good points in terms of animation and overall plot development this is all marred by a fatal flaw; the pacing of the storytelling. It is simply too slow and whilst the slow and low-key moments are easier to stomach when consuming this content in a marathon fashion I strongly feel if this series was watched slowly or on a week-by-week basis then it would be a difficult series to finish. In terms of characters, they are decent but again nothing special. Whilst Reiko and Shii were nice additions I felt Koguma was simply too bland for me to really get attached to although perhaps your mileage would differ. If you want to see a series with girls riding motorbikes then I would go for Bakuon!!. It is a better more enjoyable series.

Story 5 or 4 – If you decide to marathon Super Cub then the slowness of the plot will be somewhat diminished so take the 5 score for marathon viewing. If you choose to watch this more slowly then the pacing will become a real pain point so take the 4.

Characters 6 – Had a hard time connecting to Koguma outside the first few episodes. Reiko added balance and the chemistry between herself and Koguma. Things improved further with Shii but in the grand scheme of things none of the characters were particularly memorable.

Animation 7 – Striking background imagery and the bikes got good attention as well. Clever use of colouring to convey the moods of various scenes was another plus. It is pity that the character design was not of the same standard plus the opening and ending (outside the animation for the ending) was largely forgettable.

Overall 5 or 4 – A series that is better to marathon than to watch piece by piece due to the slow moving nature of the story. Ultimately not enough happens in the 12 episodes to make this a series worth watching. It would have fared better if they put all this content into a shorter OVA series.
Click to expand...